When we have multiple commands that we want to run at the same time (and multiple times), we put them into bash script. The extension of these bash files is “.sh”

Go to the folder and create file name “bash_file.sh”

Enter following lines into the file, then save and close it.

as show in following image

Oh! there is an error, which states “bash: ./bash_file.sh: Permission denied”.

Since permission is denied, it means we will have to do something with permissions assignment.

As we are already familiar with “ls” command. We can also check permissions of files/folders using this command by adding “-la” argument.

Actually these show the permissions on files/folders. Here “w” means write permission, and “r’ means read permissions. While “x” means execution permission. But in our case only

is displayed for “bash_file.sh” file. Which means the files doesn’t have execution permission.

Yes, it worked, and output is as follows 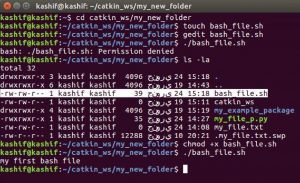 We can also check what are new permission assigned to “bash_file.sh” file.

We can see the corresponding column entry is changed from “rw-rw-r–” to “rwxrwxr-x”. it is because of running the command “chmod +x”

**First we will complete the bash script topic then we will see how we can assign or remove permissions to files/folders.**

Now we see what is inside the “bash_file.sh” file.

Here first line is “#!/bin/bash”. All bash scripts should start from this line. It tell Linux system that this file is a bash script. The next line “echo ‘my first bash file’” is just a print line as we have seen in output. 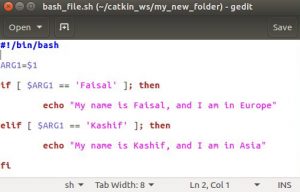 We can pass arguments (parameters) on command line as shown before. These arguments can be accessed in bash file using $1, $2, $3, and so on.

As we have already seen the command “chmod” is used to assign/remove the permission to file/folders.

The syntax of the command is as follows

We already know that there are three kinds of permissions

Similarly we have three categories as permission groups, which are represented in these nine characters: rwxrwxrwx. When, we check the permission, r or w or x means permission is already assigned, if permission is removed (or not assigned), then “-” will be shown instead or r/w/x characters.

Owner (u): These permissions apply only to the owner of the file/folder. They are represented in the first 3 characters.

Group (g): These permissions apply only to the group that has been assigned to the file/folder. They are represented in the middle 3 characters.

Other users (o): These permissions apply to all other users on the system. They are represented in the last 3 characters.

All users (a): If we use “a” or leave blank, then permissions will be applied to all users (as mentioned above).

We can run different commands to practice the assignment/removal of permissions.

will remove the write permission from the file for the “owner”.

will assign writing permission to all users on given file.